7 Interesting Facts About Computer Viruses You May Not Know

Whenever anything goes wrong with computers or any cyberattack takes place, people blame viruses. For many people, computer viruses are the most infamous technological threat and account for 57% of malware. But how much do you actually know about them?

No matter how much you know about them already, you can always learn more. So, with that in mind, here are seven fun facts relating to:

In this article, we’ll explore some facts about computer viruses that you will likely find interesting. Don’t worry: this won’t be a boring, complicated tech article; it’ll be a fun one!

Note: Initially, all types of malicious software (malware) were called viruses. Later on, as the variety and complexity of malware developed, malware programs were categorized according to their structures and behaviors. Nowadays, the three viruses mentioned below (ILOVEYOU, MyDoom and Creeper) are either technically defined as worms — i.e., another category of malware — or as both a virus and a worm. As the terms are very often used interchangeably, and these worms came to prominence before the distinction between worms and viruses was made, we’ve chosen to include these famous worms in this article. 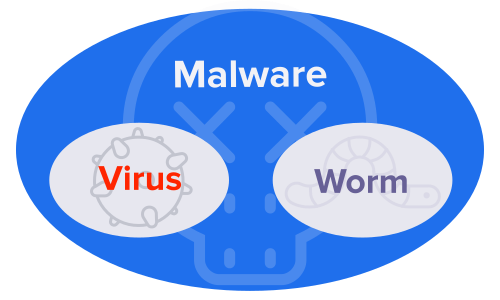 Computer Virus Fact 1: Not All Types of Malware Are Viruses

According to PRR Computers, 57% of all malware programs are viruses. That means, of all the malware-related cyber attacks, more than half of them are caused by viruses. But almost half are caused by other types of malware. So, next time someone tells you about a cyber-attack or cites scary malware statistics, remember — we can’t always blame them on viruses!

Computer viruses can replicate themselves and spread into other files, programs, and devices. This is the major difference between viruses and trojan horses (another type of malware).

Trojans can’t replicate themselves to travel into other parts of a system; instead, they stay local to the system they were originally created or stored. In contrast, viruses reproduce and can reinfect the original device as well as spreading to other connected devices like USB drives, and IoT devices until they are completely removed.

Computer worms are often misunderstood as viruses — and for good reason, considering that people often use the terms interchangeably. However, they are a different type of malware with a dissimilar mode of operation.

Computer viruses need a trigger to activate before they execute their programmed commands. Once the victim activates the trigger, for example by running infected software, opening infected files, or enabling a malicious macro, the virus starts working. Without the trigger, the virus lays dormant.

Worms, on the other hand, are autonomous and can start replicating themselves as soon as they are inserted into the user’s device. They don’t require user action to start their nefarious work.

Back in the 2000s, when sending email messages was still something of a novelty for many, a virus named “I Love You,” or “Love Bug,” came to town. Victims received an email with the subject line “ILOVEYOU” and the message “kindly check the attached love letter coming from me.” Due to such a tempting message, people were lured into opening the email and attachment. Unfortunately, as soon as they opened the email, the virus stole the host’s register key, accessed their contact list, and sent the same email to all their contacts.

It was one of the earliest computer-based social engineering attacks, which used people’s feelings to trick and manipulate them. ILOVEYOU spread to more than 45 million computers globally, causing damages upwards of $10 billion. The United Kingdom’s House of Commons, the Ford Motor Company, and Microsoft had to take their email servers offline briefly to halt the spread of the virus.

Alright, we’re now half-way through our list of interesting facts about computer viruses. Let’s focus on a well-known one in particular.

A virus (or worm, remembering what we talked about earlier regarding worms vs viruses) named MyDoom, which first surfaced in 2004, is considered the fastest spreading virus in history. According to Unit 42’s cybersecurity researchers and consultants, MyDoom was still active as of 2019, by which time it had caused estimated damages of $38 billion. (We don’t have the latest information about its status in 2022.)

Just like ILOVEYOU, MyDoom spreads via email. Some of these emails contain the message “andy; I’m just doing my job, nothing personal, sorry.” Others masquerade as email delivery failure reports.

MyDoom emails contain executable files or zip archives loaded with executable files. When opened, it replicates itself and sends the same messages to everyone on the victim’s contact list. But it doesn’t stop there. The unknown hacker who wrote the MyDoom virus was (or is) using infected devices as botnets to execute distributed denial-of-service attacks against many corporate websites, including Santa Cruz Operations (SCO Group).

Computer Virus Fact 6: The First Virus Was Created as a Security Test

The first computer virus, named Creeper, was created by BBN Technologies’ programmer Bob Thomas in 1969. It was a self-replicating virus that corrupted DEC’s PDP-10 and spread to the computers connected to ARPANET (the US Department of Defense’s forerunner of the Internet) and was displaying a message “I’m the creeper. catch me if you can!”

Nowadays, this type of code is known as a computer worm. While Thomas was just experimenting with codes and had no intention to make a malicious program, it’s clear that others didn’t share his I’m-just-curious-what-could-happen approach and opt to use worms to cause significant harm.

There’s a popular rumor that computer viruses can make an infected device explode or cause physical damage to the device. But, as you’ve probably guessed, that’s just a myth. To understand, you need to know what BIOS is. BIOS, or Basic Input Output System, is a set of codes that instruct a computer’s operating system (OS) how to interact with the hardware. Viruses can, indeed, affect hardware when they reach the BIOS level.

When viruses spread to BIOS, they can manipulate the commands — that’s the reason you might experience strange behavior from your mouse, keyboard, or speakers if your computer is infected. For example, the cursor might move in a different direction than intended, or the volume of your speakers might change seemingly at random. Thankfully, though, BIOS commands can’t tell the operating system to “blow up” any hardware, so viruses don’t have the power to blast the device even if they reach BIOS level. The closest thing might be using malware to overwork your system, which can overwhelm your device’s fan and cause your device to overheat.

Alright, it’s time to wrap up our list of interesting facts about computer viruses with one final bonus piece of knowledge. A popular conspiracy among some computer users is that the reason antivirus manufacturers earn billions of dollars is because they create viruses to boost their revenue. There are even active threads on Quora discussing whether Bill Gates makes viruses! This conspiracy is so popular that even big players have attempted to defend themselves by writing blog posts in an attempt to refute the accusations.

One of the reasons behind this conspiracy could be Scareware. Scareware tries to scare people by showing advertisements or popups mentioning that their computer is infected with viruses and trick them into downloading the advertised “free antivirus scanner/remover.” These are fake antivirus programs that contain viruses or other types of malware. As soon as you install such a program, your device’s performance deteriorates even more, fueling the idea that antivirus programs spread viruses. In reality, no legit antivirus companies would dare to make viruses and ruin their standing in a highly competitive market.

Because viruses are self-replicating and can easily spread to other devices, it only requires one virus to destroy your valuable data. That’s why you should always have a reputable, up-to-date antivirus program installed. Run checks regularly and watch out for symptoms of infection, including:

As a final word, beware of fake antivirus programs! Always use antivirus programs from a well-known and reputable company such as Comodo, Norton, Malwarebytes, or AVAST — and never download one from a popup on the internet! If you’re a business owner, you need to protect your website, server, and databases from viruses, too. For that, we strongly recommend Sectigo’s all-in-one web security package, which starts at only $94 per year.